Groundhog Day is next Tuesday, February 2. Honestly, we haven’t had much of a winter so far. Six more weeks of winter seems reasonable, to give the ski areas and snow plowers a chance to make a living. 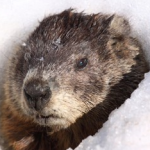 What happens on Groundhog Day? If it’s sunny, and the groundhog comes out of its burrow sand sees his shadow, he’ll be frightened and hurry back down, predicting 6 more weeks of winter. If it’s gray, the groundhog remains above ground and we’re in for an early spring. Remember that groundhogs hibernate, so this represents a period of wakefulness in the middle of their winter hibernation. Maybe Groundhog Day just celebrates sleep deprivation.

Punxsutawney Phil’s predictions are anxiously awaited, though why a Pennsylvania groundhog dictates spring around the world seems to be more a matter of marketing than scientific accuracy.

According to Punxsutawney Phil’s website, the groundhog tradition stems from similar beliefs associated with Candlemas Day and the days of early Christians in Europe. For centuries the custom was to have the clergy bless candles and distribute them to the people. February 2 marked a milestone in the winter and the weather that day was important.

According to an old English song:

If Candlemas be fair and bright,
Come, Winter, have another flight;
If Candlemas brings clouds and rain,
Go Winter, and come not again.

The Roman legions, during the conquest of the northern country, supposedly brought this tradition to the Teutons, or Germans, who picked it up and concluded that if the sun made an appearance on Candlemas Day, an animal, the hedgehog, would cast a shadow, thus predicting six more weeks of bad weather, which they interpolated as the length of the “Second Winter.”

Pennsylvania’s earliest settlers were Germans and they found groundhogs to in profusion in many parts of the state. They determined that the groundhog, resembling the European hedgehog, was a most intelligent and sensible animal.  They decided that if the sun did appear on February 2, so wise an animal as the groundhog would see its shadow and hurry back into its underground home for another six weeks of winter.

Farmers had another verse for this important day, half way between December 21 – the start of winter- and March 21, the first day of spring.

If the sun shines on Groundhog Day;
Half the fuel and half the hay

In other words, winter will last another six weeks and you’d better be able to heat the house and feed the cows.

In reality, how accurate has Punxsutawney Phil been in his predictions? According to a local Pennsylvania weather channel, only about 39%. So don’t rely too heavily on what the oversized rodent predicts.