Many people in the world were transfixed by Sunday night’s tremendous fire at Notre Dame (April 14-15, 2019). It’s amazing to think the Cathedral has been part of Paris for 850 years  and that it managed to burn in our lifetime. My grandfather McLean was in World War I and was stationed in France as a motorcycle courier and an ambulance driver. He saw Notre Dame 100 years ago, a tall thin young man next to a (what now looks ancient) motorcycle. He created a personal and vivid connection with the Cathedral.

I’ve been there twice in my life. The fall after my McLean grandmother died, my mother and I went to England and France. Mother had nursed Mammie for six months, through the end stages of cancer.  She needed to get away, and I was a recent college grad available for adventure. (It’s hard to believe that my mother at that time was 15 years younger than I am now!) We went to London, visited the National Portrait Gallery, ate fish and chips from newspaper, took the night train to Edinburgh, looked for Nessie at Loch Ness. Eventually we took the train ferry to France from Dover. We went to Paris for a long weekend, and did everything we could: the Arc de Triomphe, the Eiffel Tower, the Moulin Rouge and Notre Dame. We climbed to the top to see the gargoyles, and take in the spectacular views of Paris. I saw physical strength in my mother I’d never witnessed before. I was impressed (but not surprised) by her breadth of “background knowledge” based on literature. Her choices and time management were spot on, something I hadn’t noticed in her every day life. 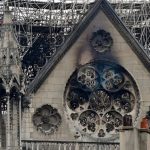 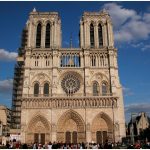 When my younger son was 13, we went to France for his birthday trip. He celebrated his birthday on a tour of the castles in the Loire Valley. We stayed at a small bed and breakfast hotel where you had to turn the electricity on in your room with a key, and the tub was incredibly narrow and deep, built for maximum bathing in minimal hot water. We ate a plowman’s lunch nearly every day of bread and ham and cheese from various markets, and one of those lunches was in the vast courtyard in front of Notre Dame. We went inside to light candles, explore the sanctuary, and look at the stained glass. From our small Congregational Church in Freeport, the Cathedral seemed impressively huge. So old! Built by hand! Before electricity! And suddenly, my child was brave. He spoke to strangers, practiced his French, bought our coffee and sidewalk pastries, explored on his own. He engaged a French gentleman  in the Eiffel Tower elevator so much that the man turned to me and said that Ben had reaffirmed his belief in America, that could produce such a youth!

Ben asked to visit the Louvre several times, and made me climb the Eiffel Tower twice, and loved the Seine River cruise past Notre Dame at night. We went to the Natural History Museum (untouched since before 1900) and the zoo to see Przewalski’s horses. Turns out Paris is a wonderful place for boys and mums, and not just for lovers, or writers, or artists in garrets.

Every tourist who’s ever visited Paris has at least walked past Notre Dame, for the 40 generations since construction started in 1163. And they have all felt the grace of the flying buttresses and the strength of the solid rock. Every mother and child is now sharing their story of the time they went to Notre Dame, and hoping that the next generation will have the awe-inspiring opportunity as well.