2021 is going to be a special year for Memorial Day. Some communities are having parades, like Berwick, Old Orchard Beach and Wells. Portland is holding a One Man March for Memorial Day, with a single person marching to place a wreath at City Hall, symbolic of a generation of parades.

However you celebrate Memorial Day, give a moment’s thought to the meaning: to celebrate, honor and remember those who died while in service to our country. (Veteran’s Day honors all veterans, living and dead.) I know many of us will be remembering friends and family lost this past year. 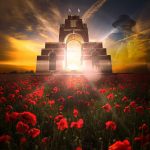 Memorial Day started as Decoration Day during the Civil War, when southern women decorated the graves of war dead. By 1890, all of the states that made up the Union forces were recognizing May 30 as Decoration Day. (Southern states were honoring war dead on several different days.) With 620,000 war dead, there were many people in villages, towns and cities across the country to remember their lost soldiers.

Memorial Day Not Federal Holiday until 1971

After World War 1, Decoration Day started including war dead from that conflict, and the red poppy, made famous by John McCrae’s poem In Flanders Fields, became symbolic of Decoration Day. (Written May 3, 1915, it’s often part of Memorial and Veteran’s Day services here, and Remembrance Day in Canada. McCrae was a Canadian doctor.)

Memorial Day wasn’t made a Federal holiday until 1971, when it was added to the roster of holidays moved to Mondays to make a long weekend for Federal employees.

While there are few parades this year, we can still make the usual observances. Flasg should be at half staff until noon, then raised. And we can observe the National Moment of Silence at 3 p.m. local time. Many of us will go to our family gravesites to plant flowers and tidy up and tell the year’s news. Such a year.