Happy St. Patrick’s Day! Honestly, when I was a kid, St. Patrick’s Day was an opportunity to color a shamrock. And possibly eat corned beef. And my name is McLean! We didn’t dye the Androscoggin River (or our hair) green, spend the entire day at the bar, or build the week around St. Paddy’s festivities.

But times change. And every reason to celebrate (and celebrate a saint) is good. Here’s a little St. Patrick’s Q and A to help you celebrate.

Q: Why is St. Patrick’s Day celebrated on March 17?

A: We celebrate St. Patrick’s Day (or the Feast of St. Patrick) on March 17 because that’s when he died. (C. AD 385-461).  Patrick’s Day is celebrated in more countries than any other national holiday, including Brazil, Argentina and Australia. It’s a public holiday in the Republic of Ireland, Northern Ireland, Canada’s Newfoundland and Labrador, and Montserrat.

A: No, Patrick was Brit (actually, of a wealthy Christina Roman family in Britain.) He was born into a wealthy Christian Roman/British family, and kidnapped as a teenager by Irish raiders. After spending 6 years as a shepherd slave, he had a revelation, fled to the coast, and grabbed a boat back to Britain. He became priest, and later returned to northern Ireland to evangelize and convert thousands to Christianity. 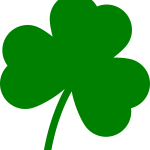 Q: Did he drive the snakes out of Ireland?

A: That’s apparently an allegory referring to the Druids. There were no snakes in Ireland in Patrick’s time, either.

Well, not really. St. Patrick’s Day falls during Lent, which has traditionally had restrictions on drinking. So you can thank the Irish in Norther America for elevating the holiday, and eventually making it the celebration it is today. Now, of course, the Wearing of the Green and other recognition celebrates Ireland as a whole.

Q: Where does the shamrock come in?

The shamrock, a symbol of Ireland, was used by St. Patrick to represent the Trinity. Shamrocks have been presented to the American President from the Irish Taoiseach or President (this year, Micheal Martin) for half a century now. Often, I might add, in a Waterford bowl. This year’s presentation will be virtual. https://www.rte.ie/news/ireland/2021/0313/1203815-st-patricks-day/

The shamrock, a clover, has three leaves. It’s been used in medicines and was a popular motif in Victorian times. In a country that had a lot of sheep, clover was a hardy forage.

A: While green has been associated with Ireland for centuries, the first green flag (with harp) was raised in 1641 by the Federation of Kilkenny during the Great Irish Rebellion.  In about 1798, an Irish street ballad (“The Wearing of the Green”) lamented the repression of Irish nationalism. That really cemented green as an Irish color.