Flu facts was originally printed in the New York Times, and it’s such a good article I’m sharing.

There’s a good chance that you or someone you know has experienced, or will experience, the agony of this year’s strain, H3N2.

Hospitals nationwide report clogged emergency rooms, and pharmacies are experiencing shortages of over-the-counter and prescription flu remedies. Vulnerable patients with weakened immune systems should consult their doctors, as should anyone who begins to have trouble breathing or feels faint. But for otherwise healthy individuals, the best strategy is to understand how flu affects your body, and practice self-care accordingly. 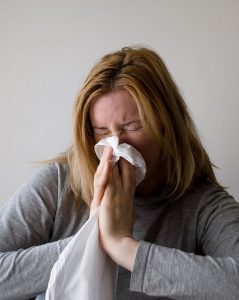 Flu is spread predominantly by droplets in the air. So if you are within 3 to 6 feet of someone who is infected, you are likely to breathe in their germy exhalations. The virus will then latch onto the mucous membranes that line the back of your nose, your throat and your bronchial tubes. Next, the invaders hijack the epithelial cells that make up the mucous membranes, taking over their metabolic machinery, to replicate and make even more virus, which infects adjacent cells.

This initial phase takes one to four days. “The more you inhale, the shorter the incubation period,” said Dr. William Schaffner, an infectious disease specialist at Vanderbilt University School of Medicine in Nashville. “In the beginning, you don’t feel sick. You don’t even know it’s there.”

As the virus colonizes your respiratory tract, your body starts to figure out something is amiss and rallies its immunologic troops in an inflammatory response, releasing proteins called interferons — because they interfere with alien invaders. Interferons flood your bloodstream and set up camp in your mucus, prompting more proteins called cytokines to join the battle. These protein soldiers circulate throughout your body, ready to rumble.

“Paradoxically, our own soldiers created for the fight are what cause us to have symptoms,” said Dr. Schaffner. “War creates damage and so you get fever and a headache and muscular aches and pains,” which you experience as the abrupt and intense opening salvos of the flu. These early symptoms are usually what distinguishes the flu from just a normal cold.

Flu facts: how to get better

The achiness and fever also signal that you need to start drinking a lot of fluids. The battle royal being waged inside you will dehydrate you more than you think. You may notice that your urine will get darker and you’ll have to go less often. Experts say to make sure you drink a cup or so of water or other liquid every hour, avoiding alcoholic and caffeinated beverages.

Drinking fluids will diminish your headache and also bolster your immune response because your protein soldiers are conveyed via bodily fluids. Dehydration hampers their movement. It’s one reason tend to want soup when they’re sick and may crave watery fruits like citrus and melon.

While you may feel rotten all over, the real battle is going on in your respiratory tract where the virus is localized. When the war is winding down, you stop feeling achy and feverish but you have residual inflammation in your throat, sinuses and bronchial tubes. All those cells lining your mucous membranes have been damaged and are like weeping sores, Dr. Schaffner said. That’s why your nose is runny and you start to sneeze and cough to clear out the detritus. Given this, over-the-counter medications that suppress your cough and dry your sinuses may not be the best idea.

“Certainly there is the thought that you don’t want to suppress a cough too much or dry out your nasal passages because you want to get rid of the infection,” said Dr. Tara Vijayan, an assistant clinical professor in the division of infectious diseases at the University of California, Los Angeles, David Geffen School of Medicine. “There’s a balance for sure. I don’t think you should suffer unnecessarily, but you need to weigh the true benefit.”

Although you want to rest, lying flat all the time can be problematic because it collapses your lungs so you can’t cough as efficiently, trapping bacteria in your respiratory tract. If the virus destroys enough cells in your bronchial tubes it creates openings for bacteria to get into your lungs, which can lead to pneumonia, a potentially life-threatening complication of the flu.

When your lungs are vertical rather than horizontal, “you’re able to breathe deeply and freely and you’re able to cough out any inadvertent material, even microscopic bacteria, that get down into bronchial tubes,” Dr. Schaffner said.

The Centers for Disease Control recommends people who are hospitalized or at high risk for complications of the flu, such as older patients, pregnant women and those who are otherwise immunocompromised, take the antiviral drug oseltamivir, sold under the brand name Tamiflu because observational data indicate it might reduce the likelihood of death.

But beyond that, rest, fluids, not staying horizontal all day and perhaps also letting in fresh air and sunlight are the best things you can do for yourself. While you may continue to cough for weeks, Dr. Schaffner said you probably aren’t infectious. Just annoying.

Here’s another article on tips for surviving the flu.