If you’re looking for old actors as proof that acting can be a life-long career, look no further than Carroll Spinney. He’s the man who has brought big Bird and Oscar the Grouch to life on Sesame Street for nearly 50 years. 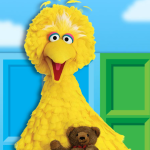 Since 1969, the 8 foot two inch canary-yellow Big Bird has been singing about letters and numbers and how to be a good friend. Spinney also acts as Oscar the Grouch, who lives in a trash can and is pretty much the exact opposite of the sunny yellow bird in both character and height, though he’s still a fan favorite. Old actors unite!

The old actors Spinney has a movie out this week called “I am Big Bird: The Carroll Spinney Story” that recounts his connection with puppets, acting and Jim Henson, the puppeteer who developed the Sesame Street menagerie and died in 1990 at the age of 53. Hensen would be 78 this year, almost as old as his friend Spinney. Old actors are continuing the legacy.

The trailer for Spinney’s movie shows a wonderful progression from the young man who first voiced Big Bird and Oscar to his later years. The old actors joy in continuing his characters is very apparent.

Want to see “I am Big Bird: The Carroll Spinney Story” for yourself? Your best bet is to get it streaming via iTunes. It opened in theaters May 5, but the closest is the Brattle Theater in Boston. Old actors, unite, and have a Big Bird party at home!