In Maine, deer ticks can carry Lyme disease. In most cases, a deer tick needs to be attached for 24 to 48 hours before it can transmit Lyme disease. Here’s a run-down of Lyme disease symptoms. 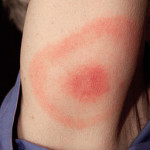 Lyme disease is easily treated in the early stages with antibiotics, which are also used to treat later stages of the disease. There used to be a vaccine available, but it was taken off the market in 2002, supposedly because there wasn’t enough demand.

It appears that the Powassan virus can be transmitted from tick to human in as little as one hour. Symptoms may occur from two days to two weeks after a bite.

There is no telltale rash and many people who become infected don’t develop any symptoms. If they do, they can include:

Currently, there is no vaccine to prevent Powassan or medications to treat an infection. Encephalitis is generally treated with supportive care and medicine to reduce swelling in the brain.

Lyme disease symptoms is a guest post was written by Diane Atwood for Advantage Home Care, which provides a wide variety of in-home senior services, including non-medical care for individuals who have medical conditions, medication reminders and transportation to and from doctor’s appointments.