It’s tick season in Maine. Ticks — tiny creatures that barely tickle when they crawl over your skin. Makes me shudder just to write the sentence.

Did you know that in Maine alone, 14 different tick species have been identified? Thankfully, they don’t all feast on humans. But one, the deer tick, is responsible for most of the tick-borne illnesses in humans in this state, primarily Lyme disease. 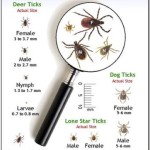 If a tick is making a meal of you, determining if it’s a deer tick is important. This guide from Mainely Ticks is helpful because it shows actual tick sizes.

According to the Maine Medical Center Research Institute (MMCRI), about two-thirds of the cases of Lyme disease in Maine are reported in June, July and August. That’s because the peak season for deer tick nymphs is June and July. That’s tick season in Maine.

All stages will bite humans, but because the nymphs are tiny and their bite painless, they often get missed. Adult ticks hang around well into the fall, so it’s important not to let your guard down even come November.

Lyme disease, which is a bacterial infection carried by the deer tick, is rampant in Maine, but a deer tick can also transmit anaplasmosis and babesiosis, as well as a virus that has health officials on alert — Powassan. Strains of the Powassan virus are also carried by the squirrel tick and the woodchuck tick.

Powassan is rare at this point — only 60 cases have been reported in the United States over the past 10 years, including five in Maine.

The problem is that it can cause inflammation of the brain (encephalitis), which can leave a person with permanent neurological damage or, in 10 to 15 percent of cases, cause death.

As for what we can do, it’s critical to always check yourself, your children and grandchildren and your pets thoroughly after being outdoors. Something I recently discovered: Lyme disease is most common among school-age children and adults over 65. Tick season in Maine covers all ages.

If you find a tick, the sooner you remove it, the less likely you’ll get a tick-borne illness.

Tick season in Maine is a guest post written by Diane Atwood for Advantage Home Care, which provides a wide variety of in-home senior services, including non-medical care for individuals who have medical conditions, medication reminders and transportation to and from doctor’s appointments.