Write your congressperson! The power of the pen is back! Did you know that our elected officials value email a little, phone calls more and a hand-written note most of all? That’s because writing a personalized note takes time, effort and thought. And you become more important because of that investment.

Remember that every single one of these folks is a temporary worker on our behalf. Donald Trump is now the biggest public servant in the US and we are his boss. Our Senators and Representatives serve because we want them to, and they should know our expectations. But how will they know unless we tell them? Here’s how to write your congressperson.

Each state elects two senators in staggered terms of six years. The Senators represent the entire state, not districts. Our two Senators are Susan Collins (R) whose next election bid will be 2020, and Angus King (D) whose next election is 2018. You can write to the Senators at their Washington  addresses, or write/visit any of their Maine offices. (see bottom of post for more info on how to write our congressperson.) 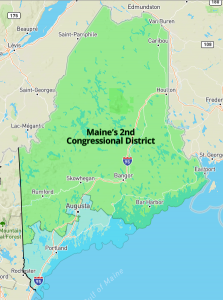 Senator King, our junior senator, serves on Armed Services, Budget, Energy and Natural Resources, Rules and Administration, and also on the select committee on Intelligence. He is an Independent who usually caucuses with the Democrats.

How to Write to Your Congressperson

The rules are simple and easy.

All those free cards you get with the hope that you’ll support a cause? Spend a few minutes and address several to the President, Senators and Representatives. Go ahead and put stamps on them! And the next time an issue comes up that you feel strongly about, dash off a polite, forceful and brief note and put it in the mail. Postcards work well, too. All you need is a line or two to get your request across. Make it action oriented. Feel free to give an opinion, but maintain your personal integrity by being truthful, sincere and polite.

Here’s an example. I’m only two years from Medicare, which I’ve paid towards my entire working life. I want my benefits secure no matter where I live or retire to. I don’t want Medicare administered by the states. I’ve paid the feds for this insurance for 45 years and I want the feds to administer it the same in Florida or North Carolina as they do in California or Maine. That’s a worthy request that I can put in writing to all four of our representatives in Congress, and the President, and our governor. Don’t mess with Medicare. Don’t make it a block grant program administered by the state. Maintain federal oversite and strengthen the program. Thank you!

There will be lots of opportunities to write about Medicare, affordable housing and transportation in the next few months. Concerned about the environment? Worried about jobs? What about the lobster and paper industries in Maine? Or the pollution from out of state that drifts here? Make sure your elected representatives are representing you!

Addresses to write your congressperson